Sculpture symposiums of the second half of the 20th century were a novelty resulting in artist mobility that was enabled by international exchanges and an intensified contact with achievements of contemporary sculpture being introduced into the art world. This became a role-model for sculpture manifestations in Slovenia, where four work sites (Kostanjevica, Seča near Portorož, Ravne and Maribor) under the common title Forma Viva (living form) were established with the motto of creating an internationally-oriented sculptural whole, based on traditional sculpture materials of the local environment. In Ravne, the industry based atmosphere originating from a three-hundred-year-old tradition of forges represented a productive foundation for eight international symposiums of Forma Viva in Steel.

The symposiums in Ravne were organised under the financial umbrella of the Ravne Ironworks and conducted by the creative leader of the project, Franc Fale, between 1964 and 1989, and again in 2008, when the symposium was held under the auspices of the Carinthian Regional Museum after a standstill of several years. The commemoration of the 50th anniversary of Forma Viva in Ravne na Koroškem in 2014 was coordinated by the Municipality of Ravne na Koroškem, which also conducted the new sculpture symposium and carried out numerous promotional activities in cooperation with the Museum of Modern and Contemporary Art Koroška and the Carinthian Regional Museum.

Today, the Forma Viva represents the most important modern collection of sculptures of Carinthia, offering an insight into the international sculpture design of the second half of the 20th century. The collection includes 34 sculptures, still preserved today, which have been managed by the Museum since 1996. The Museum has promoted its collection in various exhibitions and published the catalogue Forma Viva 1964 – 1989 as part of the promotion in 1999. On the occasion of the 50th anniversary of Forma Viva Ravne na Koroškem, a comprehensive promotional strategy of the collection was also prepared. The sculptures were subject to extensive restoration work and various signboards were installed, a retrospective catalogue was issued and an internet presentation of the sculptures and their creators was prepared. Compared to all activities, the Forma Viva Ravne na Koroškem became the first permanent open-air collection of large steel sculptures, which can also be admired through a web application (fvr.si) by using the virtual navigation system on a smartphone. With its permanent character and heritage value, the international collection of fine arts Forma Viva Ravne na Koroškem adds a distinctive charm to the local environment and brings a great potential for the development of local tourism. 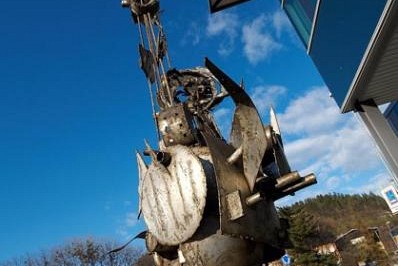 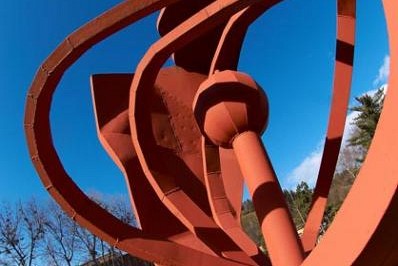