A permanent exhibition in the form of a lapidarium comprising Roman stone monuments from the excavation site Zagrad near Prevalje and individual stone finds from Ravne na Koroškem municipality was put on display in April 2005.

Roman cemetery Zagrad was discovered in 1860. Until the beginning of the 20th century various construction works resulted in the discovery of approximately 50 (mostly marble) stones: parts of tombstones, jutting roofs, fragments of pillars, square blocks, relief plates and sarcophagi. They were found in river Meža’s riverbed and in the former cardboard factory’s canal between the dam and the bridge, within a distance of 50 metres. Cemetery dates back to the 2nd and 3rd centuries AD.

The lapidary collection contains preserved stones from this excavation site: a relief plate depicting two mourning people, a gravestone portraying a scribe and a square block with a nymph relief. The tomb plate with a trident and dolphin relief originates from Preški vrh, whereas two lion statues were found on the territory of the former Ravne Ironworks. Both lion statues were probably part of the same tomb, and one of them is now kept at the Maribor Regional Museum. 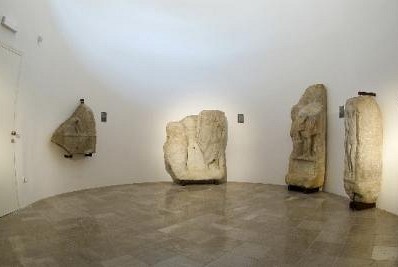