School culture represents a foundation for creating, preserving and developing human culture and civilization, and the educational system has been changing, adapting and modernizing throughout history. It was frequently abused by the ruling political elites for political and assimilative purposes, especially in ethnically-mixed areas. Carinthian Slovenes were also exposed to forceful Germanisation through the 19th century educational system. A permanent museum exhibition about the history of schooling in Libeliče was set up in the Libeliče parish house in 2010. The former “bishop’s room” houses a classroom dating back to the first half of the 20th century. The desks are simple and each seats 4 or 5 pupils. They are also fitted with inkwells, since pupils were initially using pens for writing, and some examples of textbooks in use after World War II are exhibited as well. The classroom contains an old ceramic stove, a teacher’s desk, map and globe, abacus and some other teaching aids.

Various teaching aids and pupils’ works, presenting the school development and modernisation from the most basic school accessories to the 1970s, are showcased in glass cabinets on the walls. Initially pupils used little boards and stones instead of notebooks. They kept their pencils, pens, crayons and other writing utensils in wooden school boxes that were often neatly decorated, some also had rotating parts for basic calculations. School bags were simpler than today, and were frequently hand-made by parents. A wooden abacus stood in front of the blackboard for mathematics lessons, later the pupils had also more complex personal calculation tools, and there were special tools for learning the alphabet as well. The curriculum contained various subjects, including Handicrafts, Home Economics and Gardening. Some finished products made by pupils are displayed in glass cabinets. The Old Classroom museum collection presents a classroom from the past, with the exhibited objects reflecting a continuous modernisation of curriculum. 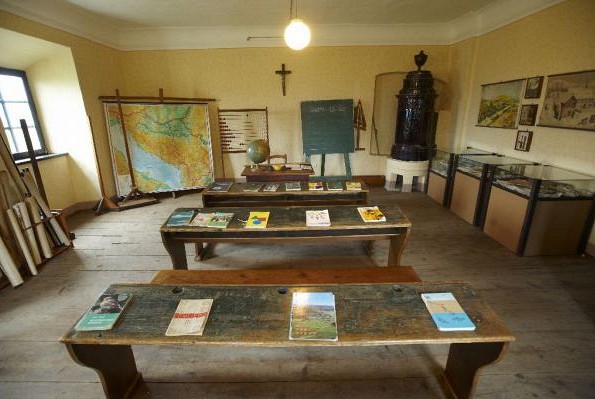