A permanent exhibition presenting the traditional homestead typical for the area of the present-day local community Libeliče, Libeliška gora and Gorče in the period from the second half of the 19th century up until 1970 has been set up in the renovated section of the barn adjacent to the parish house in Libeliče.
The exhibition was proposed by the local people themselves, since they wished to preserve the now mostly forgotten objects in their barns, granaries, basements and attics as “story-tellers” of past farming methods and the peasant lifestyle, and pass on this knowledge to future generations.

The villagers actively took part in collecting objects and more than 600 museum items typical of everyday farm life of the chosen area were included in the permanent installation. The exhibition is focused on depicting the peasants’ working rhythm throughout the year and the important chores typical of each season. It has a two-level layout, on the ground floor farm chores are presented: spreading manure onto the fields (“gnojvoža”), ploughing, sowing, hoeing, hay-making, harvesting, threshing, storing crops, making cider (“prešanje mošta”), pasturing, preparing bedding for animals (“steljaraja”), tending the cattle and the occupation of draymen (“furmani”). The second part of the exhibition, situated on the 1st floor, presents the peasants’ spiritual horizon through the rhythm of changing seasons. Topics that are dealt with are Shrove Tuesday, farmer’s beginning of the work year, Easter, protecting crops, medicinal herbs, feasts after completed work (“likof”), patron saints, flax braking, spinning, pig slaughter (“koline”), Christmas, preparation of tools etc. Each of the topics is presented through the lens of typical tools and other objects. Interesting exhibits include: “škajdrovc” – a frame with a blade for cutting fodder; foot stamping mills for pounding grain; “pokšlite” – a horse-drawn sleigh for transporting hay; “rolovc” – a horse-drawn roller for rolling the fields; an electric fence from the early 1950s; “preša” – oil press; a typical Libeliče wicker basket called “cejna” etc.

The “grain’s cycle” has been emphasized through presentations of chores such as sowing, hoeing, harvesting and threshing. An ambient installation demonstrating the threshing process presents one of the phases of processing grain into bread. Bread has always held an important status in traditional peasant culture, as it represents a material embodiment of the farmer’s hard work. Nowadays rye bread is still an important part of the local people’s diet. 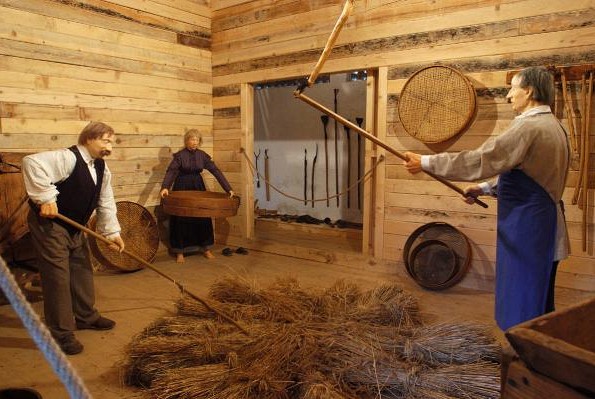 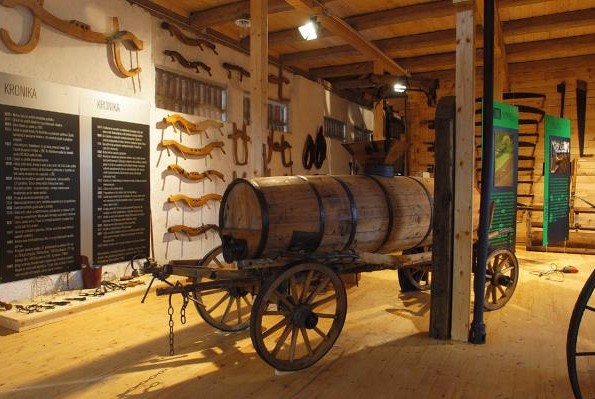