In cooperation with the Institute for the Protection of Cultural Heritage, unit Maribor, our museum carried out the restoration of the old kitchen in Libeliče parish house in 2000 and 2001. A permanent exhibition was set up there.

The place where food is prepared has represented the most important part of human dwellings throughout human history. The oldest type of kitchens, which older inhabitants of the Libeliče area still remember, are the smoke kitchen (“dimnica”) and the so-called “black kitchen” (which in some places remained in use even after World War II). The dialectal expression for the old parish house kitchen, with its smoke and soot blackened walls, is “črna kuhna” and it represents a particularity among known developmental types of kitchens. The magnificent, baroque-designed Libeliče parish building, built between the 17th and 18th century, still has the mighty kitchen in its core. The nearly square space is situated between wide stone walls and is reminiscent – due to its position below the ground floor – of a basement, with its two central stone pillars supporting two tall arches with a triangular niche. The kitchen’s essential components are a high open fireplace next to the window in the left corner, and a bread oven to the left of the entrance. Aim of the reconstruction was to approximate the kitchen’s pre-World War II state, thereby achieving a functional renovation.

Characteristic objects, such as various wooden kitchenware and pottery, an open fireplace, special containers for making butter (“pinje”) and kneading dough (“koduje”), as well as other cooking accessories are exhibited in the kitchen to demonstrate the food preparation traditions in this area.

Parallel to the renovation of the old kitchen and preparation of a permanent exhibition, a study group, in collaboration with members of the Libeliče Peasant Women’s Society, was established to research the food culture of Libeliče and its surroundings. This cooperation resulted in a cookbook with the meaningful subtitle “Da ne boš vočn od mize šou”, which is dialectal for “So that you won’t leave the table hungry” and clearly reflects the friendliness and hospitality of the local people. 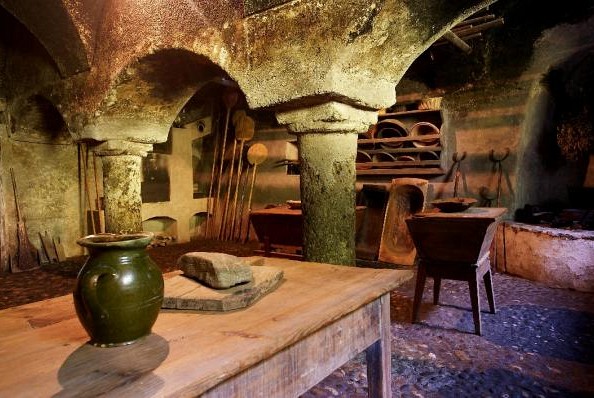