As a school teacher at the branch school Vuhred of the primary school Radlje ob Dravi, Majda Marija Sušek discovered the rich world of children and childhood. While working at the school as well as organizing various celebrations and meetings, she developed strong relationships with the local and surrounding population. During her work as a mentor, she passed her extensive knowledge and love of folk tradition to children, youth and adult folklore groups. She devoted a lot of her energy to reviving and preserving folk traditions. More than twenty-five years ago, she began collecting children’s toys and games. The world of children fascinated her and in 2007 she published a book of children’s lullabies, entitled Aja, tutaja (title of a well-known Slovene lullaby). In 2011, she summed up all her collector’s and research efforts in the book Po otroških stopinjah med Pohorjem in Kozjakom (Following the footsteps of children between Pohorje and Kozjak), dedicated to childhood in the 20th century.
Today, the collection of toys by Majda Marija Sušek includes more than 300 different original and reconstructed toys. The core of the collection are children’s toys: different rag dolls, children scooters, grinders, flutes, brass instruments, bows and arrows, slings, balls made of rags and other toys that were made by a group of thirty older women and men from Vuhred and its surroundings according to their childhood memories. Simple, home-made children toys that were made by family members or even by the children themselves, were often destroyed, lost or discarded over the years. They were only preserved in memories of the locals who managed to replicate them. These toys help us picture the world of children’s games and imagination in this part of Pohorje more than one hundred years ago. Only a few toys in the collection were purchased in a store. A special place is held by the oldest toy in the collection – a teddy bear that has been preserved for as long as one hundred years.
The collection was presented to the public on several occasions, in 1997 and 1998 in the local municipality Radlje during the municipal holiday celebrations, in 1998 at the Regional Museum Maribor and two years later at the Carinthian Regional Museum in Slovenj Gradec. In 2011, the collector presented her collection at the secondary school Muta within the program of preschool education.
Since September 2015, the collection was put on display at the Radlje ob Dravi Museum as a permanent exhibition “Gremo rinkico talat” , a world of children’s games and toys; a collection of toys by Majda Marija Sušek. This collection of toys, especially the reconstructed pieces, help us preserve this part of the cultural heritage and values that were passed on to children in the earliest years of their lives. Due to rapid overall development, the children’s worlds of the past and present are drifting further and further apart. By preserving and exploring the games and toys of our grand- and great-grandparents we gain a better understanding of the children of today.

1 An old Slovene children’s game: children sit in a circle and hold their palms together as in prayer. One player has a ring (“rinkica”) and as he is moving around the circle, he tries to give the ring to one of the other children. The second player watches closely and tries to determine which child was given the ring. If he guesses correctly, he can switch places with the first player. 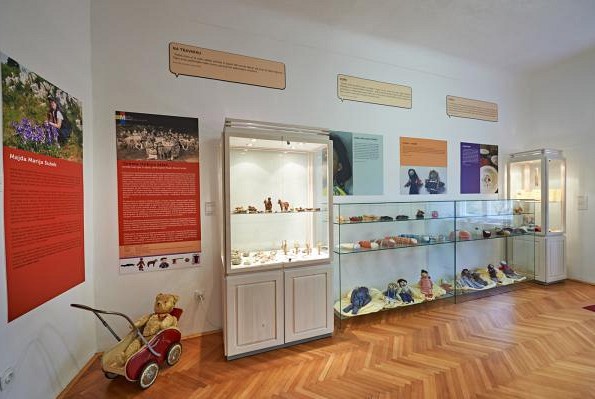 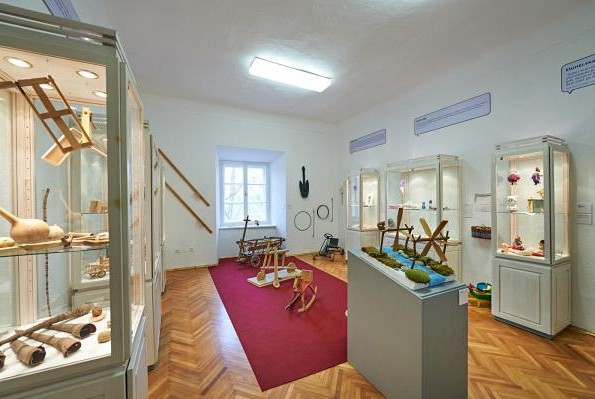