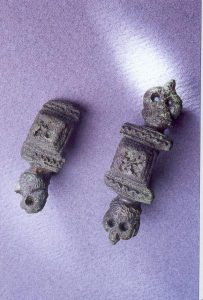 The excavated objects are being systematically included in occasional exhibitions, from 1992 onwards the permanent archaeological exhibition Archaeology of Koroška Region was displayed on the ground floor of museum headquarters (address: Glavni trg 24), but was closed in 2010 due to the renovation of the building. Renovation was part of the project “Zrcaljenje podob – oživljeni zven preteklosti” (“Mirroring Images – Sound of the Past Brought to Life”). Since 1995 the department is in charge of St. George’s Church in Legen. Archaeological parks Colatio, Grammar School Slovenj Gradec, Dovže and Ravne Castle have been set up at locations of exploration sites. Chapel of the Ravne Castle houses a lapidary exhibition containing Roman stones from Zagrad and Ravne.

The materials are presented in exhibition catalogues and articles. Archaeologist Saša Djura Jelenko was taking part in archaeological explorations at sites of the Štajerska motorway’s construction for ten years. In 2008 our second archaeologist, Maja Kumprej Gorjanc, was employed by the museum.