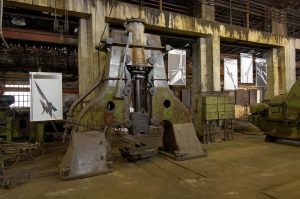 Industry developed early in the Meža, Mislinja and Drava Valleys and helped shape the profile of the region and the lives of its inhabitants. By the mid-19th century, the Meža Vally was regarded as the most industrially developed area of Slovenia thanks to the mining industry, in particular the Thurn and Rosthorn Ironworks. In addition to agriculture, the region was strongly influenced by the mining, ironmaking, forestry and timber industries, as well as crafts and other economic activities, which can be observed in industrial, technical and cultural heritage.

The Technical Heritage Department records, collects, documents, studies and explores the historical aspects of the economic and technical development and presents it to the public in the form of exhibitions, publications and lectures.

The first collections and permanent exhibitions were designed after the Workers’ Museum (Delavski muzej) was established in Ravne na Koroškem in 1953. During the subsequent years, the Museum assembled ironmaking, mining, forestry and timber processing collections.

The items preserved reflect the technological development of the region and tell a story of its natural endowments and how they were used to promote industrial development. They also show how the growth of companies influenced the development of localities and the region itself.

Permanent exhibitions designed by professional staff are prepared in close cooperation with the local communities. Since 2003, the Department has been coordinating and managing projects within the framework of the Slovenian Trail of Iron Culture, together with the Municipality of Ravne na Koroškem, and combining its activities with the society of the same name, including institutions and individuals dedicated to the preservation of technical heritage.

The cooperation with the abovementioned municipality resulted in projects on the completion of the Old Ironworks museum complex titled The Centre of Industrial History and Labour Culture with Ironmaking Museum (Center industrijske zgodovine in delavske kulture z muzejem železarstva). Since 2005, this location houses collections that represent the development of steel industry in Carinthia.